FORESTIUM is a world rich in flora & fauna. Want to know more? Click on one of the names below for more details on all the plants & animals of this magical land, including descriptions, illustrations and sounds … Large, majestic, white bird. Raetheons flock in small groups and can be seen soaring high above and all throughout Forestium. They perch in the treetop canopy or on branches of Yucust trees. Raetheons have a pleasing song but can and do screech when startled. A fully grown Raetheon stands easily as tall as an adult Woodsman. They have large and powerful wings but prefer to conserve energy by gliding as much as possible. Dark creature of the underworld. Commanded by the Goat, Blood-bats are flying animals that convey images and sounds they perceive back to their master. They fly in large groups and will savagely attack Raetheons or any other living creature - including Forestium inhabitants. They have huge, pointed talons and razor sharp fangs, and use these to great effect during attacks. About half the size of a fully grown Raetheon, they have large, leathery, opaque wings. Blood-bats are extremely proficient flyers and are significantly more manoeuvrable in the air compared to Raetheons. Large free-roaming boar that lives on the forest floor and found mainly in the West and South. Wood-boars are feisty animals that will attack and maul if you get too close to them. Catching a Wood-boar is very difficult, as they have a canny sixth sense and avoid people at all times. Wood-boars have fangs and sharp teeth but can be domesticated. They are very fast and extremely agile animals but can be cooked and eaten. A Wood-boar kill, when it rarely happens, would typically be used as a the main feature of a village feast. 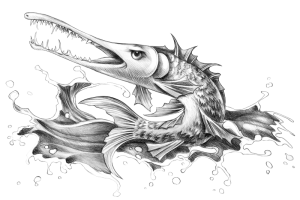 Common throughout the River of Torrents, Razorfins are fast-swimming, elongated fish with long snout and sharp teeth. They are silvery with no discernible markings. Razorfins can grow up to 2 metres long and can launch themselves out of the water. Their 2 rows of sharp teeth on both their upper and lower jaws can rip through flesh with ease. Stories of villagers gone missing have been attributed to them being taken by Razorfins whilst attempting a river crossing. The predatory fish spends much of its time alone but they are known to shoal in large numbers during mating season. Furry animal with bushy tail that lives in the treetop canopy. Chirvels are skittish by nature but do come down from the trees to forage. One or more Chirvels typically stands guard as others forage for food on the forest floor. Their fur can be used to make clothing, although they are notoriously difficult to catch. Chirvels often live close to village settlements, where leftover food scraps are easy pickings for them. Flarrets - or more correctly, Wild Grassland Flarrets - live on the open plains to the east of the River of Torrents and can also be found throughout the Valley of Moross. They can be caught easily enough when they are out of their burrows and exposed. Their pelts can be used to make clothes and they are quite edible. Flarrets live in large colonies and their fur is either white, brown or patchwork of both. 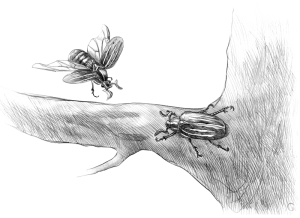 Flying insects that collectively hum whilst in flight. Dengles come out at dusk and feed on swarms of Finkle flies. The humming sound can be quite soothing. During the tribal feuds, raids on other villages would often take place at dusk under the cover of the noise of swarming Dengles. Small bee that nests on the branches of a Yucust tree. Yucust-bees are relatively harmless unless stoked, which can send them into a defensive frenzy. The sting from a single Yucust-bee is not terribly painful but the collective stings from thirty or more can cause paralysis and, in extremely rare circumstances, death. Yucust-bees produce Yucust-honey, a delicious, sweet nectar. It takes about a year for a nest to get to the size that it's worth harvesting the nectar. Small flying insect that comes out at dusk with an illuminated tail. Finkles don't make any noise but the tip of their tail can pulsate with a mild glow. This attracts Dengles, that feed on them on the wing. Although they don't sting or bite, Finkles can be a nuisance, as they get into your mouth and ears when the swarms are large enough. They build nests that dangle from vines beneath the branches of Yucust trees. Depending on the sub-species, the nests have various colours.

Large horse-like creature. Wood-shires are the workhorse of Forestium and used to pull carts and other heavy loads. Although mild-mannered, a startled Wood-shire can be quite dangerous to anyone close by.

Edible plant that grows prevalently on the ground and on trees throughout Forestium. Shrooms are categorised into the following families:

There are various types of vine that grow voraciously all over Forestium. When stripped of their outer layer, some vines have an inner core that is stretchy. This is ideal material for slingshot elastic and bowstrings. Other vines are extremely strong and can be used in constructions or to bind things together.

Tall tree with horizontal branches prevalent throughout much of Forestium. Yucust trees often support nests of Finkles as well as Yucust-bees.

Fast-growing tree prevalent throughout western Forestium. Ashfer wood is favoured because a felled tree will grow back quickly and the wood itself has numerous uses. Logs from the Ashfer tree are the favoured material for constructing huts and other buildings.

Deciduous tree that grows sporadically throughout the west and north of Forestium. Liffle tree leaves have sweet taste to them and are a common ingredient in cooking. Liffle wood is very hard and used to make cart wheels and slingshots.

A small bush with soft, edible leaves & roots. Favoured for their taste, Twiggling leaves are a common ingredient in Twiggling broth and other cooking recipes.

Small bush that produces red berries and straight twigs. It grows in thickets - especially around the edge of a body of water, such as a lake or river. The ripe berries from the Bramok bush are often used as slingshot ammunition and the twigs can be fashioned into arrows. Bramock bushes are favoured by Woodsmen due to their utility at providing weapon material.