PORTALLAS is full of magical worlds with magical artefacts. Click on the name of the artefact below to find out more about it …

Magical orb found in FORESTIUM. An experience with the Orb of Time will take you to some point, either in the past or the future, that is significant to your destiny.

Magical orb found in FORESTIUM. The Orb of Vision can be used to commune with the Goat, although this is ill advised, as the Goat has incredible discipline of mind and uses this skill to manipulate you to his advantage.

Magical orb found in FORESTIUM. The Orb of Suffering, when combined with the other orbs from FORESTIUM, will trigger the opening of the PORTALLAS. However, only one that has experienced true suffering can activate this particular orb.

The mirror of prophecy may be used to see briefly into the future. However, the vision may not be something the viewer wishes to see. Also, the mirror can be used by the Goat to reach into FORESTIUM.

Magical orb found in ARCHIPELAGO. The Orb of Sacrifice will only activate when one that holds it dies. It additionally has the ability to open a portal into another of the worlds connected by the Portallas. Unlike the Portallas, the opening lasts only briefly before the orb becomes again dormant.

Magical orb found in ARCHIPELAGO. Before Archipelago existed, the Orb of Sunshine came down from the heavens. Light from the sun shone through the orb, casting shards of light onto the surface of the sea. Where each shard struck the water, an island was formed. When in close proximity to Palm Crabs, dark creatures of the underworld, the Orb will pulsate and erupt into shards of light, which can stun or even kill the creatures.

Magical orb found in ARCHIPELAGO. The Orb of Flight has the ability to call forth the collective magic of Kuelas, beautiful, colourful birds native to Archipelago. Activated by the touch of a Kuela tail feather, the orb shoots a beam of light into the sky, around which tens of thousands of Kuelas will fly. The Kuelas fly blistering fast around the orbs beam, creating a vortex. Those in the centre of the vortex are then lifted and carried great distances.

The Dagger of Pa'hoa is a magical artefact that was first forged form the initial eruptions that created the Archipelago island chain. When the Orb of Sunshine first came down from the heaves, the sun shone through it, creating shards of light spreading out and down. Where a beam struck the sea, an island was formed. The first eruption spewed rocks into the air. One of these was struck by a shard of light, forging it into the Dagger of Pa'hoa. The Oracle (known locally in Archipelago as the Flame of Eternity) became the guardian of the dagger for many hundreds of years thereafter.

Magical orb found in EDUFU. The Orb of Memory has the power to restore memories that have been lost or taken. It resides in the pyramid temple of Asteena, in the far south of the Valley of Edufu. For maximum efficacy, the orb should be used in each of the temples along the Edufu valley. The orb's magical power will only work when placed at the right spot and at the right time of day or night.

Magical orb found in EDUFU. The Orb of Wind was originally discovered - and put to good use - by Queen Raha. It was subsequently lost to time, although rumoured to be buried somewhere with the queen, whose final resting place is unknown. The orb calls forth the awesome power of the wind, and can be used to blow ships great distances or to sweep away all that surrounds the bearer.

Magical orb found in EDUFU. The Orb of Power is a magical orb whose magic was not known until centuries after its discovery. Because of its aesthetic appeal, it was used to decorate the royal throne, which resides in the Great Pyramid of Astowan, the capital city of the Valley of Edufu. The true power of the orb is that it will protect whomever is the rightful seat of power whilst they are on the throne..

The Eye of Horentus is a magical artefact found in EDUFU. Affixed to the top of a wooden staff, the eye is a small mirror through which brief glimpses of far away places - including in other worlds - can be seen. Visions in the mirror are not always easy to see or interpret. 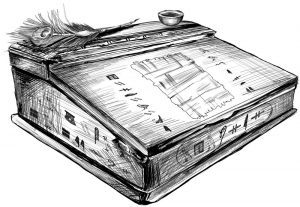 Owned by King Ahmoses III, the current ruler of the Valley of Edufu, the magical papyrus is actually a pair of sheets of papyrus. The king keeps one with him in Astowan. What the king writes onto his papyrus will appear in real time on its twin, which the king can then use to send messages over great distances.

A magical powder found in EDUFU. The Goat, in his feud with King Ahmoses III, has cast a memory spell over the entire Valley of Edufu. This has created a memory barrier. Anyone passing through this barrier will have their memories stripped from them. Rain in Edufu carries traces of this magic. Although it is highly illegal to do so, nefarious criminals (mostly in the southern city of Astowan) are known to distil rain water and process it into Powder of Heka. When inhaled, this powder will cause temporary memory loss and disorientation, rendering one highly susceptible to suggestion. The effects wear off within a matter of minutes.