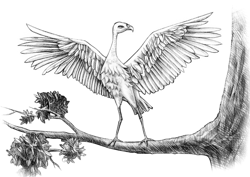 One of the things I've really enjoyed about writing PORTALLAS is coming up with the rich diversity of flora and fauna. With each book in the series representing a totally different environment, I have a blank slate to start with each time. Conjuring up weird and wonderful plants and animals allows me to set my imagination free but I haven't gone overboard by constructing things that are so alien, that it distracts from the story.

One of the animals from Forestium: The Mirror Never Lies is called a Raetheon, which is a large, majestic, white bird; a peaceful animal, full of grace and splendour. When I came to assign names to my creations, my first thought was to think about how the animal moves, and so I came up with names that would evoke comparisons between the make-believe and real-world creatures. 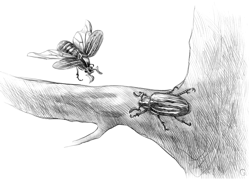 I've applied this principal to some of the animals in Forestium. There's a fish with a long snout, and razor-sharp teeth, that I call a Razorfin, since I imagine it has Razor sharp fins and teeth. In other cases, I considered what a similarly-looking real-world animal is called and concocted a name that sounds similar. This is true for the Flarret (similar to a rabbit) and the Chirvel (not unlike a squirrel).

For some of the wildlife, I had to come up with something completely original. Such is the case with the Finkle (perhaps similar to a firefly) and Dengle (flying beetles). For others, I went with a combination of words that helps the reader by giving them a reference to something in the real world they can understand, such as a Wood-shire (type of horse), Wood-boar (wild boar) and, the most nasty of all the creatures in Forestium, the Blood-bat, which might look like an overgrown and menacing looking bat or flying fox. 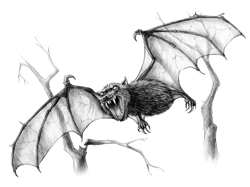 In the case of the Blood-bat, I wanted to create a vicious creature with huge claws and fangs, which would evoke fear and loathing; something that would attack a gentle and defenceless Flap, and so really give the reader something to despise.

With the aid of an illustrator and some clever audio, I've been able to brings these animals and more to life. See, and where applicable hear, all the flora and fauna of Forestium here.